Why Tiger winning the Masters is a big deal 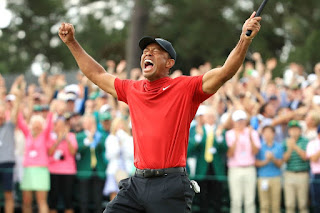 I used to play golf. I liked it when I was younger and I had time to play, but as work and family began to take more of my time I left it behind. There were other things I wanted to do with my free time. While I enjoyed playing golf, I absolutely hated watching it. I think the proverbial "watching paint dry" would be more entertaining. So why am I writing an article about Tiger Woods winning the Masters? Because it's not about golf. It's about people. For those of you who know me, you know that I love people. I love helping people be their best. I love success. But what does that have to do with golf? Nothing...it just so happens that Tiger Woods is a golfer, but also a human being. If you're just focused on Tiger's winning of the Masters, you're missing the real story here.

Let's look back. Tiger hit his stride back in 1997, and for more than a decade, he was the one to beat on the PGA tour. But Tiger made some poor decisions and had some other unfortunate factors hit him pretty hard. He had a rather long fall from grace. Many considered him a has been and assumed his career was over. People are funny creatures. It's almost as if some folks delight when someone who achieves great success fails. But his fall is what made his win so great. Every year someone wins the Masters, but it's not every year that someone who has endured what Tiger has wins.

At some point, all of us fall. We all make mistakes. We all do things we wish we could go back and change. Sometimes we fall and we don't even know why we fell. We shake our fists skyward and exclaim "why me!". For some of us, this is a season of our life. One that we must endure. One that can make us better, stronger, smarter, and equipped to handle the next season a little better. That's exactly what Tiger did. He never stopped working. He stumbled, he fell, but he got back up again and won arguably the most prestigious golf tournament in the world.

That's why so many people are talking about Tiger today. Because they relate to being knocked down and having to pull themselves back up again. They know the loneliness you feel when you're at the bottom and they long for the hugs, high fives, and congratulations when you're a winner. If you cheered for Tiger this weekend, see if you can find someone who needs someone to believe in them. Give a hand up to someone. Don't judge that person who made a mistake. Help give someone else their "Tiger Moment".
at April 22, 2019

Who's you're favorite boss? If you can't answer that question pretty quickly, it might be because you've never had a really good boss. I really don't like the term "boss". To me, it connotates someone who tells someone else what to do. I hear that term and automatically flash back to the old cartoon The Flintstones. I can hear Mr. Slate yelling at Fred..."FLINTSTONE!!!". And along those same lines, good old Mr. Spacely from The Jetsons. Those characters are "bosses" for sure. And who can forget the  ubiquitous Bill Lumbergh from the movie Office Space and his TPS reports. 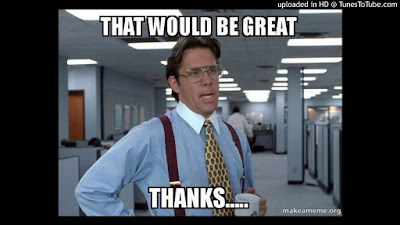 The best bosses aren't the ones you work for, it's the ones who work for you. Being a huge proponent of servant leadership, I always work to serve my team. To not be "the boss" but to be one of the team with a different role. To represent my team to the organization and put them in the best situation to succeed. That's the tough part, because not every executive in an organization is a good leader. Most people are promoted into leadership positions because they were a hard worker and an excellent individual contributor. Great individual contributors don't automatically make great leaders. Leadership is something you really need to study, practice, and hone. There are people who are naturally good leaders, but leadership is about more than getting people to do what you want them to do. A great leader cares about his team. They know them personally. They take the time to talk with each member of their team individually. A great leader asks questions and wants feedback from their team members. I've always felt the worst situation a "boss" could ever be in is to meet with their team, then upon leaving the room, the team talks about what a horrible meeting it was and how the boss is out of touch with them and isn't engaged with the team. I attended an American Management Institute class in New York City several years back. The instructor was absolutely fantastic, and we still stay in touch till this day. I remember him saying something that really rings true, "The employee always wins". As leaders, you have to remember this. If you forsake your team, focus only on your own career while ignoring theirs, mistreat your employees, don't develop them, don't have discussions about career path and how they can achieve their goals...or worse yet...you don't know their goals. You will struggle with retaining top talent. Top talent has options. Top talent has marketable skills and will shop the market to find an opportunity where they can achieve their goals and do work that is meaningful to them. That leaves the poor leader with a team of either unengaged individuals who don't care and are "turning the crank" to get a paycheck and employees with no marketable skills who will need development which they aren't going to get.

One of my favorite bosses had a medical procedure and was unable to come into the office. She was such a fantastic servant leader that she asked me to come to her house. We sat on her back porch, ate lunch, and talked. That meeting yielded a fundamental change in how my team performed our duties and reduced delivery of critical infrastructure to customers from 51 days to 18 days. While I'm sure she didn't feel like working, she respected me enough to make time to meet with me. That deepened my loyalty to her and earned her a higher level of respect from me. That meeting impacted several people and the organization as a whole.

Ready to do things radically different than those bad "bosses"? Here's what you can do to be a great "boss":

I've held leadership roles from entry level management to executive levels. I understand we all get busy and consumed with our own daily duties. But if you lead a team, they are your #1 priority. While it's difficult to be a servant leader in some company cultures, never underestimate the power of an engaged, empowered, happy, collaborative, team.

And if you aren't in leadership, much of this applies to customers too. It all boils down to having the heart of a servant, loving people, and understanding that we are all in the same business...the relationship business.
at April 09, 2019