Commitment vs Skill: How to choose the best employee

As someone who has been responsible for hiring staff for much of my career, I've learned quite a bit about what makes a great hire. When I hired my first employee way back when, I didn't do what most people normally do. I was working for a medium sized company and was one of three employees in the IT department. I was doing a lot of hands on work and needed to bring in someone to do end user support as I focused more on network, server, strategy, and financial matters. Most of the people I interviewed had the required skills. However, what I was seeing in most of the candidates is that they had been doing the same job for years. It made me think, "Why have they been in the same job for so long? Don't they want to advance in their career?"

As I continued to interview candidates, I interviewed a young man with very little experience. But he had something no one else had. I remember him telling me, "I can do anything. I may have to learn it, but I can do anything". What I heard was, "hire me for my commitment, not my skills" and that's exactly what I did. He was so grateful to have a chance as I'm sure he'd been turned down time and time again due to his lack of skill and experience. He stayed true to his word. He learned everything! In fact, he learned so well he was promoted into management a couple of years later. He did such a great job there that he impressed others and was hired away. He's been in a number of jobs and now works as an executive in an internet security firm. Inside of 15 years, he went from entry level support to an IT executive. Not because he was the most knowledgeable, but because he was committed and had a level of confidence that he can do anything. These are the people you want!

I'm a college graduate. I am working on a graduate degree. I have attended endless hours of training in by IT and business related classes. I've even taught Total Quality Management and Team Leadership classes for a number of years. But none of that is important. What is important is that there isn't a job that I don't believe I can do provided there isn't a physical limitation. At 6'5" I'm not going to be the best horse jockey, but if it's a job I can learn, I'll learn it. I truly believe that people posses more ability than they think they have. Everyone has talents and abilities that may make it easier to do one thing or another, but everyone can do more than they think they can. There is no doubt in my mind that I could be a doctor, lawyer, engineer...whatever. I just need to be committed enough to make it happen. 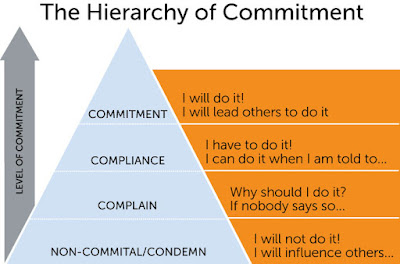 I really have to say, I hate resumes. They list past jobs, education, and certifications; but they really never give you a good view of the candidate. I've hired people with great resumes, only to be sorely disappointed. I've hired people through recommendation who's resume didn't list a single thing required for the job and they were some of the best employees I ever had. With all the job posting boards, social media sites such as LinkedIn, and HR systems that scan for keywords, there are a LOT of quality candidates being passed over. Even with my experience across several verticals and job functions, I've received the automatically generated denial letter. I've also been in the unique position of receiving the denial letter, then having someone I know recommend me and I got an interview the next week. The old saying of, "it's not what you know, but who you know" still rings true. But the "who you know" part comes full circle back to personality. There is an old saying, "It's nice to be important, but it's important to be nice". This is as true today as it was back then. You may be the best at your job, but if you're a jerk, no one will want to work with you. The candidates who are recommended by others are usually the ones who work hard, do whatever it takes to get the job done, and will step up to any challenge regardless of whether it's "their job" or not. These are the types of folks most people enjoy working with. We've all seen a kickoff in a football game where the returner gets past everyone but is ultimately stopped by the kicker. It's not his job to tackle. He's not protected for it. He's not sized for it. But he takes the hit for his team. That's the kind of guy you want working for you, and most importantly, that's the kind of boss you want to work for.

If you have individuals on your team who aren't committed, don't see them as a lost cause. The chart above breaks down levels of commitment. In one of my previous blog posts I discussed employee engagement. These align very closely. Employee engagement has three levels. Actively disengaged, not engaged, and engaged. The bottom two in the pyramid above are actively disengaged. These employees will harm your organization as they are actively working to spread negativity within your organization. The "Compliance" tier is similar to not engaged. The employee will do what you tell them, no more, no less, and they won't complain. But an engaged employee is typically one who will be the most committed. You can gain that commitment by seeking out ways that employee can use their talents and abilities. In the technology sector, I've found most employees enjoy problem solving over being told what to do. If you as a manager tell someone what to do, they will do what you tell them. If you allow them to solve the problem and present their suggestion to you, you may be pleasantly surprised at what they come up with. I won't rehash employee engagement, but it's critically important to your organization. As a leader, it's your job to evaluate, assess, and utilize the talent you have available to you. Never pigeon hole a great employee because of their job title or their past job experience. Do your best to make them better than they though they could ever be. That's where you'll get that "I will do it!" commitment.

Most committed people are looking for that dynamic company that rewards a "can do" attitude with bigger challenges. Their #1 desire is an employer who recognizes what they are capable of doing and leverages it. They know they can do anything, if only given a chance. Hire these people!