The end of another calendar year is upon us. Social media feeds are filling up with "year in review" posts. People look forward to a new year, a new start, a fresh beginning. Many make resolutions and have hopes for a better year than the one they just had.

2014 has been quite an experience for me. It started off really well. I'd just completed one year at a new job. The goals and objectives I'd set for myself and my team were making good progress. I was working in a role that was both rewarding and challenging. My career goal of becoming a Chief Information Officer (CIO) was within reach and times were good as far as I was concerned. I'd relocated to Alabama to have the opportunity of achieving my career goal and had met new friends and was adjusting to life in my new home.

In March, a member of my team lost her husband. While attending the visitation, I had an opportunity to meet her two sons. They were very polite young men, and the emotion of losing my father hit me as I thought about her sons having to grow into manhood without their father to guide them. Perhaps this event was preparing me for what happened next.

Three days later I was relieved of my duties as Vice President of Information Technology and found myself in an area with a sputtering job market. I had no equity in my home due to my recent relocation and was still saddled with costs associated with my move to Alabama. I kept the faith that something would come up soon. I prayed every day. I asked God to grant me patience and to give me peace in knowing that he would provide for me. With no income, times began to get tight. Anything I wasn't related to was getting sold. Desperation was setting in.

Just when I was about to lose hope, I received a very attractive job offer to work in Huntsville for a military contractor. It would mean as much as three hours commuting to work and back each day, but it was a small price to pay considering the job. Sadly, due to some political red tape, I never received a start date for that job. It also cost me a month in my job search. But there is always a lesson to learn in life, and I was about to get one.

On April 28th, a tornado ripped through the county I lived in. The EF3 twister was measured at 600 yards wide with wind speeds up to 140mph. 417 homes were damaged or destroyed and two people lost their lives. The church I attended organized a volunteer effort, and since I was no longer working, I volunteered to participate in the clean up effort. What I saw that day framed my situation in a completely new light. Assisting in the clean up effort allowed me to step away from my own very minor problems to assist others with their much larger ones. 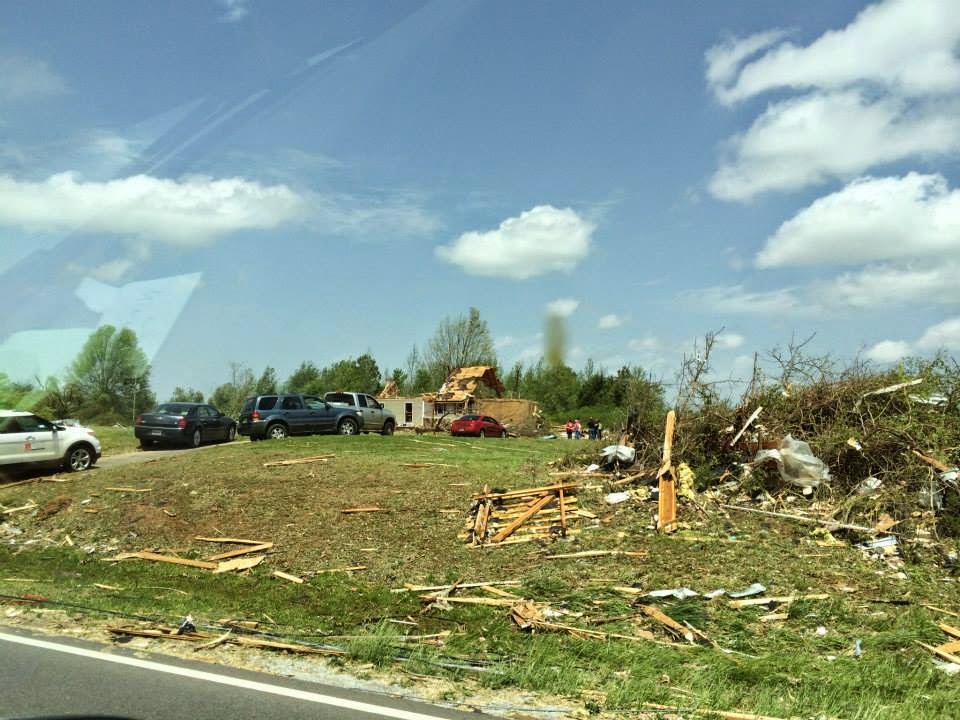 Sometimes the Lord shows up in places we least expect, and he showed up for me that day. My attitude improved. My spirit was healed. I counted my blessings versus my problems. My faith grew and I knew that an opportunity would present itself. I began looking for work back in Nashville. Within a few days I received a message from a friend and former co-worker. He had seen my resume in a large stack and pulled it out. He told the hiring manager not to let me get away. I was hired three days later and have enjoyed working at the State of Tennessee since May.

But that's not the end of the story. Having a house to sell in a somewhat economically depressed area is not an easy task. We listed our house in Alabama the week I lost my job in March and it finally sold in December. Having a mortgage to pay prevented my family from buying another home and we took shelter at my in-laws house. My in-laws are wonderful Christian people. They have been more than hospitable to my family and I. I'm very blessed to have people like them in my life, but let's face it...living with in-laws is not the ideal situation and with limited financial resources, we were stuck. Just as life was getting me down again, I received a phone call from my previous employer informing me that one of the guys on my team had passed. He and I were close, and we had an appreciation for each other since we had so much in common. I made the trip down to attend his funeral, and while paying my respects to his widow, the Lord showed up once again. Putting things back into perspective. A few weeks later, that lovely lady passed away after a long battle with cancer. Two wonderful people taken away far too soon.

After finally selling our house in Alabama, my wife and I began looking for a place to live. We still had a bit of money to save up for a down payment, but we wanted to shop the market. We were very fortunate to have found a property we both love and the situation was absolutely what we needed. We hope to be closing on it in early 2015.

As the year winds down, and I reflect back, it would be easy to take inventory of all the bad times and heartache, but in reality, each problem is a gift. It's an opportunity to overcome something, to do something great. Without problems in our life, we would be unable to truly appreciate the good times. Every day is a day the Lord has made and we should rejoice and be glad in it.

If you find yourself in a situation that isn't where you want to be, remember that sometimes it's best to bloom where you are planted. Happiness isn't always getting what you want, but wanting what you get. Never stop setting goals and making plans, but understand when those goals aren't met and those plans don't come to fruition that it just might be one of the best things to happen to you. Sometimes only time an experience can reveal what gifts problems are.