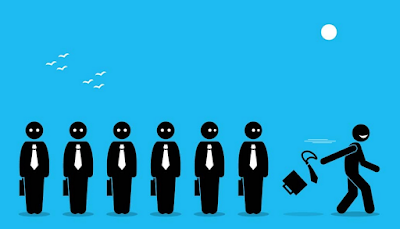 Back in 2009 I traveled to New York City to study at the American Management Association. It was fairly early in my management career and I thought I was a "big shot" getting to go to NYC and learn management. My class was mostly entry level managers who had never held a leadership role or taken any other leadership training. The instructor had us introduce ourselves and when it came to me, I mentioned that I'd had Six Sigma Team Leader and Total Quality Management training and that I had become a trainer on those subjects for my company. At break the instructor pulled me aside and told me that I was probably in the wrong class as it was for people with no previous management experience. As any great leader does, he recognized my knowledge and skill and put me to use as a sort of co-instructor. We had a great week of class, and the instructor took extra time with me to give me instruction he wasn't giving the rest of the class. One of the things he told me was, "the employee always wins". At first, I wasn't sure what he meant, but he went on to tell me that many of the students in the class were going to make the common mistake of being the "boss" versus being a leader. He went on to explain that it's not the job of an effective manager to tell people what needs to be done. It's their job to set a vision, to be a story teller, to help their team understand why what they do is important and where it fits in the overall success of the company. A great leader motivates, mentors, and has a deep concern for the success of their team.

So how do the employees win? The instructor laid it out for me. He told me that great employees who are highly skilled got that way because they are motivated and want to continually improve themselves. They need to be engaged and involved. They need to feel important and needed. If they do not get what they desire emotionally, they have the marketable skills to leave the organization and go work somewhere else. They take with them institutional knowledge, but also their potential which wasn't properly leveraged. Now the manager has been left with people who either have no marketable skills, or they are so apathetic they figure "if I leave it will be the same somewhere else". To be fair, these employees may be fantastic people. They may be smart, and have lots of knowledge and skill, but when you work for a bad manager, you lose all motivation to go beyond what is asked of you. You don't feel connected to the mission at hand. You are simply "doing time", turning the crank until the end of the day.

Where does this leave the manager? How have they "lost"? Here's what happens. Their top talent has left them leaving them with a team that has grown apathetic and is performing at a bare minimum level. Some employees may even begin to under perform. Here's where things typically go really wrong. The manager, thinking they are doing their job, has a conversation with the under performing employee. This usually happens during a review period. The manager gives them poor ratings on their review, and often provides them with a corrective action plan (CAP) on how to "improve" their poor rating. This is normally the beginning of the end. The employee is further demotivated by this activity and if there was any trust and rapport built between the two, it's fractured now. The employee will begin doing just enough to meet the expectations of their review. No less, and absolutely no more. That's not the dangerous part though. That same employee will now spread a message of despair throughout the organization. Negativity breeds negativity. Soon others will begin to feel the same way as their friend and co-worker. Before you know it, this will get back to the bad manager who either has to let that employee go, or try to have another "one on one" conversation with the employee.


The bad manager is costing the company a lot of money in lost production, low employee morale, and turnover. The sad part is that none of this is typically measured. It should be a key performance indicator for every company, but it isn't. So our manager is losing, the company is losing, and the employees without marketable skills are losing. Meanwhile, the high performing employees have gone on to another company to help them succeed...sometimes it's the competition. They took with them all your internal knowledge. Being high performing, they have already done a strengths, weaknesses, opportunities, and threats (SWOT) analysis on your company in their head. They know where all the breakdowns are and how to fix them...but you never asked them to help. So now they are taking those lessons learned to your competitors.

So we know the problem, but how do we fix it? How do you make bad managers into good ones? First off, I want share my experience. This is based on what I have personally witnessed. You can send someone to training, you can have them read books, you can tell them how a good manager should lead....but if it's not in their heart to love people and want them to succeed....they more than likely will not be a good manager. You can teach skill, but you can't teach personality. The best managers I have ever had weren't the ones who had a superior intellect than me, or who were more knowledgeable than me. No, the best managers I've ever had where the ones who invited me to lunch. Asked me about my family. Asked for my thoughts around issues not related to my job. They took the time to develop a strong friendship with me. Lastly, they asked, "How can I help?". I've had other managers ask that question, but you can tell they are asking it because they read in some book that is what they should do. It didn't come from the heart, and they don't really care. The ones that care not only ask the question, but follow through on what you told them you need.

Let's go back and look at that CAP scenario again. What if that manager had said, "I can see you're not 100% engaged in your job, and I understand that. Tell me how I can help you in your career. What can I do to get you to a place where you will perform to your fullest potential?". A true leader wants to help people succeed even if it's not on their team. A good leader will provide constructive criticism which will be received as beneficial. If you have a strong person on your team who is overqualified for their role, never hold them under water. Help them rise to the top. This not only shows that person you care, but it shows your team as well. It builds trust. It also expands your influence. I once had a guy working for me as a desktop support technician. He was awesome! Better than me in many aspects. I helped him get promoted to a management position. He is a VP in a large company today making far more than I do. If I needed his help with something, I know he'd take my call anytime.

If you are a manager, do not underestimate the impact you are having not only on your company, but on the lives of all your team members. Being a great leader is the best thing in the world. There is nothing more fulfilling than being the leader of a strong team that works well together. A team who loves their jobs and works hard for the company because they have an affinity for the customers and the mission of the company. Nothing beats winning as a team.
at April 29, 2020